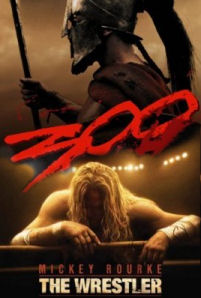 An article today caught my eye as I was going through my gmail inbox. It was about Iran being angry with Hollywood over the movies ‘The Wrestler’ and ‘300’. Now I don’t know why foreign countries keep getting insulted by works of fiction?

I mean, after watching 300, I didn’t think to myself, “oh man, those Persians are so flamboyant and evil, and I guess 300 men could easily hold thousands of them off”. No, why would I? Its crystal clear that the movie is a work of fiction, and a Greek mythological story out of a comic-book style novel (Very well done if I might ad!)

The issue pertaining to ‘The Wrestler’ was that Mickey Rourke wrestled his old nemesis, “The Ayatollah.” And used the Iranian flag to choke him out (anyone who has seen wrestling knows that they do this dumb-ass stuff all the time, with no intent to insult, but rather entertain and be super cheesy).

I think everyone needs to relax when it comes to movies, and enjoy the medium as it is, and lets focus on the truly evil movies like Lion King (look this one up, I learned its the most racist, sexist & prejudice filled family movie ever criticized.)