Fixing the Installer from Crashing on iPod Touch

As of late I ran into some issues installing new application on my iPod Touch.  It all began by having the Installer crash every time I was adding / queuing new applications.  I searched high and low on the net to try to find a resoluton for this issue.

I found some posts that other users created regarding not being able to install anything new, but these were dead ends, until I found the following post.

So what I did was uninstall some apps (about 5) and at this point, I guess it freed up enough memory to allow for a new install.  I quickly followed the directions from the post: 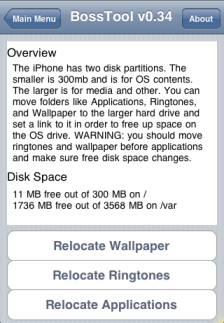 Try deleting some apps and install “BOSSTOOL”. It moves apps and such to another folder on your iPhone and after that you shouldnt have that message anymore.

I installed ‘BOSSTOOL’, I was able to at this point due to freeing up memory by deleting currently installed Apps. I clicked the ‘Free Disk Space > ‘ icon and moved my FONTS & APPS to the 2ndary partition as it required. After this, the app reported that I had over 150MB free of 300MB, so I proceeded to install the apps that I couldn’t.

Hope that helps any of you out there searching for a solution.