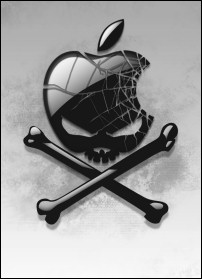 Well over the weekend, I tried setting up Mac OS Leopard on (iPC 10.5.6 iso) on an Acer Aspire 9500.  This took probably 5-6 re-formats, and I was defeated.   I was hoping that I could get this particular hardware setup working with Mac OS.  But unfortunately I don’t know my way around kexts well enough and ended up scrapping the project.

Here are some of the issues/hurdles I encountered with the hardware:

I got pretty far with this project. I was hoping to get Mac OS running on the laptop just for testing, as I already own Leopard and a fantastic Mac Mini which I use as a media pc hooked up to my LCD in the livingroom.  But unfortunetly the hardware was either way over my head or skill level, when it comes to modifying MacOS installs (kexts and all that jazz).

The moment when I gave up came when I installed the WRONG kexts based on a forum suggestion/research post.  This kext killed the USB ports and disabled any keyboard / mouse access (I was using the USB devices as the built in trackpad & keyboard did not work).

All in all, I enjoyed tinkering with the hardware, and I’m just dissapointed that Mac OS is not an option for a PC enthusiast (yet) without shelling out the big bucks for a nicely build Mac hardware system.

If you have an Acer Aspire 9500 model laptop, maybe this will help you.  At least it will give you a starting point of what hurdles to expect as I did.

A great Polish joke I heard...

RE: Why is it called Windows 7?